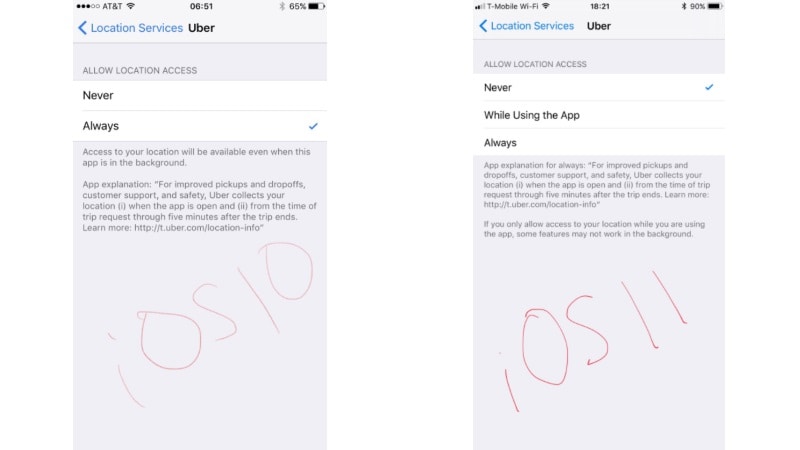 Apple made several announcements while introducing iOS 11 at WWDC 2017 earlier this week, but as you might expect, due to the large scope of changes made to the mobile platform, some didn’t make the cut to the keynote. As the developer preview of iOS 11 is now available some user-friendly changes have now come to light. With iOS 11, users will now be able to choose “while using the app” location sharing option for all apps while the OS also get the option to remove less-used apps on temporary basis to solve their storage needs.

The new iteration of iOS, which will be made widely available this fall, appears to make the much-needed third local access option of “While using the app” a mandatory feature for all apps. Several apps, including controversially Uber, earlier provided two options only “Never” and “Always”. Thiis new addition will stop these aforementioned apps from forcing users to choose between these two options for any app. This would also prevent the possibility of collecting background data in the process as well.
Moving to the storage-focused feature, if you know an iPhone or iPad user who has 16GB of storage on their device, by now you would be used to of hearing the complaints regarding storage space constraints. While Apple doesn’t seem likely to introduce expandable storage to its devices soon, the company has introduced a new feature called Offload Unused Apps with iOS 11 to help users with their storage problems.

The newly introduced Offload Unused Apps feature, which can be turned on from the Settings menu, essentially removes apps from the device on a temporary basis but keeps the data intact so that it can revive the app again without losing the data later, as pointed out in a report by The Verge. Users can choose to activate the feature by heading to Settings > General > iPhone Storage.

While the deleted apps will still show up on the Home Screen as greyed-out icons, they can be re-installed with just a tap. The Offload Unused Apps feature works in background and automatically removes the apps but users also have the option to choose individual apps that need to be offloaded.